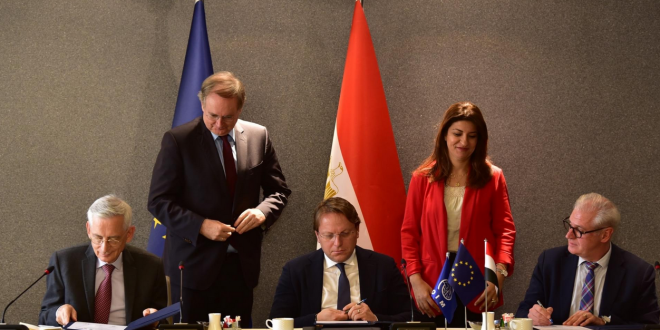 The European Union signed an agreement with Egypt on Sunday for the first phase of an 80 million-euro border management programme, a statement from the EU delegation in Cairo said, at a time when Egyptian migration to Europe has been rising.

The project aims to help Egypt’s coast and border guards reduce irregular migration and human trafficking along its border, and provides for the procurement of surveillance equipment such as search and rescue vessels, thermal cameras, and satellite positioning systems, according to an EU Commission document published this month.

Since late 2016, irregular migration to Europe from the Egypt’s northern coast has slowed sharply. However, migration of Egyptians across Egypt’s long desert border with Libya and from Libya’s Mediterranean coast to Europe has been on the rise, diplomats say.

From January 1 to October 28 this year 16,413 migrants arriving by boat in Italy declared themselves to be Egyptian, making them the second largest group behind Tunisians, according to data published by Italy’s interior ministry.

In 2021 more than 26,500 Egyptians were stopped at the Libyan border, according to the EU Commission document.

Egypt is likely to experience “intensified flows” of migrants in the medium to long term due to regional instability, climate change, demographic shifts and lack of economic opportunities, the document says.

The agreement for the first 23 million-euro phase of the project was signed during a visit to Cairo by the EU’s commissioner for neighbourhood and enlargement, Oliver Varhelyi.

It will be implemented by the International Organization for Migration (IOM) and CIVIPOL, a French interior ministry agency, and is expected to include the provision of four search and rescue vessels, Laurent de Boeck, head of IOM’s Egypt office, said.

The EU Commission document says that to date, Egypt has addressed irregular migration “predominantly from a security perspective, sometimes at the expense of other dimensions of migration management, including the rights based protection migrants, refugees and asylum seekers”.

The programme will seek to develop the capacity of the Egyptian ministry of defence and other government and civil society stakeholders to apply “rights-based, protection oriented and gender sensitive approaches” in their border management, it says.