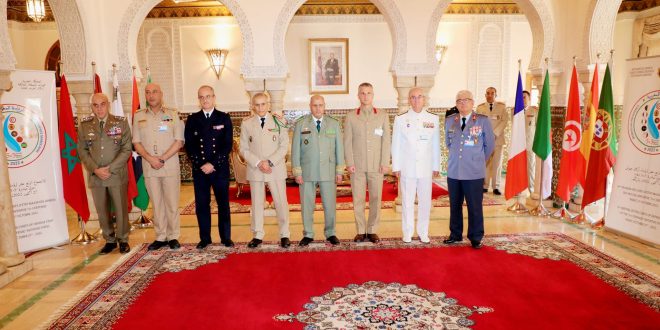 The Chief of the General Staff of the Libyan Army, Lieutenant-General Mohammed Al-Haddad, and his accompanying delegation, participated in the 14th meeting of the chiefs of staff of the armies of the European-Arab-Maghreb 5+5 Defense Initiative, which was held in Rabat, Morocco on last Thursday.

Al-Haddad stressed in his speech at the meeting the importance of strengthening and continuing joint cooperation among the initiative countries in all fields, especially supporting efforts aimed at combatting illegal immigration and human trafficking.

He also reiterated the need to support the efforts of the Euro-Maghreb Center in research and strategic studies, reaffirming the importance of exchanging experiences in the fields of environment, climate change and dealing with crises and disasters.

The participants at the Rabat meeting underscored in a joint statement the importance of strengthening security in the western Mediterranean region, and continuing to support the 5+5 defense initiative.

International Relations and CooperationSecurity Forces
All
2022-10-31
asaeid
Previous Haftar: We are getting close to making decisive decision to restore the Libyan State
Next Former FM Siyala taken into custody