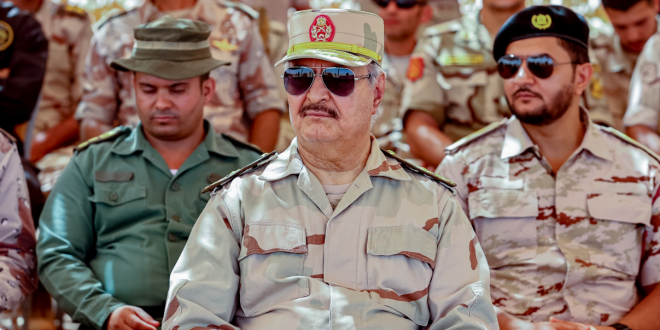 Haftar’s power gambit: A return to war in Libya?

Libya’s political uncertainty has become a knot that can’t be untied, particularly after the long-awaited 24 December 2021 elections failed.

Since then, the North African country has witnessed the formation of a parallel government, several bloody clashes that claimed dozens of lives, a legitimacy race between political rivals, and is now on the brink of having a third government.

Two weeks ago, while describing the situation of Libya at a briefing at the Security Council, the special representative of the United Nations envoy to Libya, Abdoulaye Bathily, said the political deadlock still exists with “no clear end in sight”.

It came after the statement of the High Council of State’s head, Khalid Al-Mishri, in which he hinted at forming a third government following his series of negotiations with Aguila Saleh, the speaker of Tobruk-based House of Representatives (HoR).

Amid all these rapidly developing issues, US citizen and warlord Khalifa Haftar, currently facing another series of court proceedings for his role in the Tripoli military college killings, said that he “wants to liberate the country”.

During his visit to the Al-Jufra region of Libya, which is under the control of the infamous Russian mercenary group Wagner, Haftar announced that he is “close to taking a decisive decision to determine a path in order to restore the state”.

Haftar, while calling to expel foreign forces from the country, also said that he is “ready to liberate” the country despite the fact that UN reports have revealed that he has been supported by Syrian, Chadian, Sudanese, and Russian mercenaries during his war against the internationally-recognised government in Tripoli.

Speaking to The New Arab on Haftar’s new war threats, Sami Hamdi, the editor-in-chief of The National Interest, a global risk and intelligence company, says Haftar’s so-called Libyan National Army (LNA) is more organised than each of Western Libya’s forces.

“Haftar believes that if given another chance, he can easily reach Tripoli’s gates,” said Hamdi, explaining that “Dbeibah has been unable to settle the internal wrestling in Tripoli decisively”, referring to the prime minister of the Government of National Unity (GNU).

“As individual militias continue to demonstrate a willingness to entertain the prospect of facilitating another armed uprising against Dbeibah’s government, Haftar believes this can work in his favour,” he added.

Speaking to TNA, Jalel Harchaoui, a Libya specialist and associate research fellow at the Royal United Institute for Defence and Security Studies, says although Haftar’s intent is indisputably bellicose, he has only “used the word of battle in a vague matter — not ‘war’ per se”.

“Moreover, he did not allude to any attempt to enter Tripoli. This reflects his lack of confidence; this is not 2019 by any stretch of the imagination,” Harchaoui told TNA.

“Nowadays, Turkey possesses a formidable military apparatus in northwestern Libya. Therefore, the Haftar camp knows it cannot prevail in a frontal clash with the Turkish-backed camp,” he added.

Since the Dbeibah, Bashagha, and Mishri-Aguila camps all have at least some claims of legitimacy, Haftar seems to be losing his relevance to the future of Libya. So, what has triggered him to make such statements about another war? Is he afraid of losing his position?

According to Hamdi, it might be due to the rumours that a unity government formed by Dbeibah and Bashagha is on the table.

“There have been rumours that Turkish President Erdogan has been pushing for a unity government that includes both Dbeibah and Bashagha. Bashagha is useful to Haftar because he tries to undermine Dbeibah’s legitimacy. The moment Bashagha reaffirms it instead by joining a unity government, he becomes a liability for Haftar,” Hamdi says.

As it is known, Wagner mercenaries have been on the front with Haftar. Following Russia’s war on Ukraine, many questioned Moscow’s potential withdrawal of its mercenaries to send them to fight alongside its soldiers on the Ukraine front.

According to Harchaoui, the Ukraine war “has not caused the Russian presence to shrink substantially,” and “there are still more than 2,000 Russian mercenaries on Libyan soil”.

“A vessel packed with ammunition came to Benghazi from Russia recently. In addition, other nations, such as Egypt and Saudi Arabia, seem to support Haftar. France offers Haftar at least its diplomatic and political support — and perhaps more,” he explained.

While agreeing with Harchaoui, Hamdi says that he doesn’t think Haftar is afraid of losing his military power.

“Although Wagner is effective, Haftar continues to wield significant influence on local forces and is able to mobilise them at will. This enables him to remain relevant enough that Russia believes it worth the effort to send Wagner mercenaries,” he said.

“Right now, the United States assumes that the diplomatic tracks — as they exist now — will make it possible to avoid a disastrous return to destructive war in Libya,” he added.

“In other words, there is no acute alarm in Washington when it comes to Libya. If a full-on war erupts, then the importance of Libya will rise somewhat in the pecking order but in the grand scheme of things, Libya isn’t very important for the US,” Harchaoui explained.

“Italy and Britain tend to remain on the side of Dbeibah even if they are not particularly satisfied with him. The UAE has been accommodating Dbeibah since 2021 but could potentially revert to its traditional pro-Haftar stance if Libya slides back into a hot war,” he continued.

Hamdi believes that “there is an element of fatigue among the international community,” which “lends itself in favour of a ‘decisive’ resolution to the conflict.” He added that even if a full-scale return to war materialised, it’s likely that “any international reaction to a war would be very limited”.