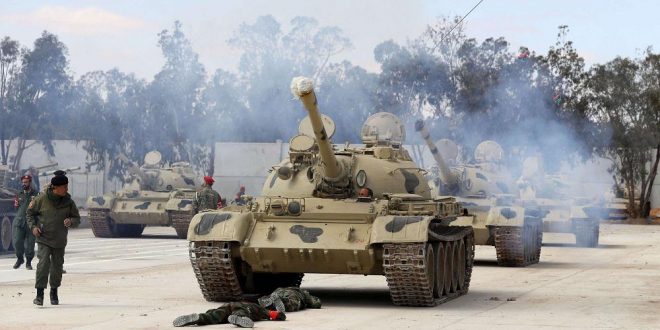 The mood in Libya’s capital, Tripoli, is sombre and uncertain. While people go about their daily routine they are busy trying to figure out if another war is coming or not. They are still reeling from the sudden eruption of violence last August between two local militias that killed and injured hundreds of civilians. Such small fights, though, are nothing compared with the bigger ones like the 2019-2020 battle that raged for over a year, killing hundreds of civilians, displacing over a hundred thousand more and causing widespread destruction around the city.

This is what really worries most Libyans, particularly residents of the capital. Supported by thousands of Russian mercenaries, General Khalifa Haftar, the military strongman based in the east of the country, attacked Tripoli in April 2019 believing that he could take it within days; his troops failed to enter the city. Forced to stop their advance just a few kilometres from the city centre, Haftar laid siege to the capital for months. The embattled Government of National Accord turned to Ankara for military assistance. Ankara agreed on condition that Tripoli signed two different agreements: a deal demarcating the maritime borders between the two countries; and a security deal guaranteeing Turkish military assistance in return for granting Turkiye the right to have its troops on Libyan soil, since when, for the first time since the 1970s, foreign forces operate from bases within Libya. Both deals were controversial domestically and regionally, and still are.

Desperate Tripoli signed them in November 2019 and, by early 2020, hundreds of regular Turkish troops, supported by thousands of Syrian mercenaries, poured into Tripoli, reinforcing its defences and pushing Haftar’s forces back gradually. Turkiye used its drones and, in June 2020, Haftar’s troops and Russian mercenaries retreated to their bases in southern and central Libya, making his defeat complete. Many Libyans credit Turkiye with ending that destructive war.

In October 2020, both warring sides agreed to sign a UN-brokered ceasefire that is still holding, but could crumble at any moment.

Ever since, most Libyans keep looking for any signs of another war. The majority believe that it is inevitable, and only a matter of time before fighting breaks out again. Most observers agree that when the political process is frozen war becomes a default option to break the deadlock. Indeed, the UN has just appointed a new envoy to Libya to try to rescue the political process after the elections promised for December last year were postponed. Substantial progress has yet to be made.

The strongest signs of a potential war came within weeks of each other, emanating from Haftar’s camp in Benghazi and his enemies in Tripoli. On 17 October, Haftar attended a military parade in Sebha, the southern regional capital. He spoke about what he called a “decisive battle for Libya’s sake” that he and his supporters must wage. Two weeks later, Haftar put out the strongest signal yet that war remains a valid option, while visiting Al-Jufra region in central Libya. Referring to Turkiye, without naming it, he said that, “[We have to fight] a decisive war to liberate the country from its [Turkiye’s]” military and mercenaries. He blamed the political deadlock for such a decision if it ever has to be made. The absence of a political solution, he said, is behind the suffering of the Libyan people “whose will is aligned to that of the armed forces.”

Turkiye now has a large military presence in at least three bases, including a naval facility on Libya’s Mediterranean coast. Russian mercenaries supporting Haftar are stationed south of Sirte, not far from some major oil fields.

On 25 October, Prime Minister Abdelhamid Dbeibeh, who doubles as Minister of Defence, visited Istanbul’s air defence exhibition from where the first sign of possible war came. In his capacity as defence chief he met with his Turkish counterpart and signed two new security deals. A government-controlled Facebook page published a statement saying that one of the deals covers “protocols” on how to implement the 2019 security pact, while the other aims to “boost the capacity of Libya’s air force using Turkish expertise.” The second deal also includes the purchase of seventy Turkish-made Bayraktar drones and other military equipment. Such drones played a critical role in forcing Haftar to retreat from Tripoli. If not for war, why would Dbeibeh buy them?

Politically, Libya is deadlocked. The new UN envoy is yet to reveal his plans on how to bring about an agreement for elections because the House of Representatives and the Higher Council of State still cannot agree on a constitutional basis for them; last year’s elections failed for the same reason. What is certain is that neither the Tobruk-based parliament nor the Tripoli-based council want elections any time soon, as that would be the political death of both.

In a revealing Policy Brief published this month, Stephanie Williams, former UN Special Advisor on Libya, repeated what she has already told MEMO: members of neither institution want elections because that would “deprive them of their seats and access to lucrative salaries, benefits and the fruits of patronage.” In her latest paper she described a December 2021 encounter with one high-ranking Member of Parliament in which he complained about her repeated “talk of elections”. The man noted “without a hint of irony or shame” that the Lebanese Parliament had remained from 1972 to 1992 without elections. He asked why the Libyan parliament could not do likewise. He essentially wants the same failed Libyan legislature elected in 2014 to stay in place until 2034.

At the same time, all parties in Libya keep talking about elections “as soon as possible” and all of them agree that they are the only way out of the impasse. Implicitly, though, they hate the very word elections, while promising that voting is just around the corner.

Against this background of political stagnation war might well be an option to break the deadlock despite the fact that no one party can emerge victorious. Furthermore, we mustn’t forget that defeated generals hardly ever give up. They tend to come back hoping to win a fight to satisfy their egos with a victory that eluded them before.

Unfortunately, Libya’s nearly seven million people still have to live under the threat of violence simply because they accepted to be hostages to a corrupt establishment that completely disregards them. This wily and opportunistic elite will continue to promise elections, but prepare for war.

Electoral ProcessPolitical TransitionSecurity Situation
All
2022-11-17
asaeid
Previous Libya decries behavior of Greek FM after “he refused to get off his plane in Tripoli”
Next Haftar-led Libya forces kill seven, capture two IS militants