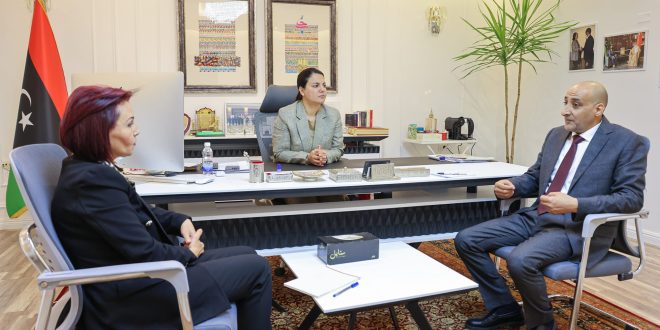 A diplomatic spat erupted between Libya and Greece yesterday after Greek Foreign Minister Nikos Dendias refused to get off his plane at Tripoli’s Mitiga airport. The diplomatic incident led to Libya recalling its ambassador to Greece and summoning the Greek Charge d’Affaires in Tripoli to make a formal protest to Greece.

The Libyan Foreign Ministry released a statement on the incident saying that ‘‘Despite the crude policies and positions adopted by the Greek Foreign Minister during the past days towards the interests of the Libyan state, which were reflected in his unbalanced statements regarding Libya’s sovereignty and its right to relations that achieve the aspirations of its people.

However, in a surprising situation that calls for resentment, the Greek minister refused to get off his plane and returned to where he came from without any explanations.

In this regard, the Ministry of Foreign Affairs and International Cooperation deplores this behaviour and will take appropriate diplomatic measures that preserve the prestige and sovereignty of the State of Libya.’’

Meanwhile, Dendias explained in a tweet that ‘‘The Foreign Minister of the Libyan transitional Government (Najla Mangoush) tried to force her presence at the airport so that I would have to meet with her. As a result, I cut short my visit to Tripoli and departed for Benghazi, where I outlined Greece’s positions’’.

The Greeks claim they had an agreement which the Libyan government was aware of whereby Dendias would only meet Presidency Council head Mohamed Menfi. They claim the Aldabaiba government broke this agreement and attempted to carry out a public relations coup by forcing Dendias to publicly meet Foreign Minister Mangoush.

The incident is, off course, the result of the Libyan Turkish agreement of 2021 over the Exclusive Economic Zone (EEZ) agreed between the two. The agreement is widely seen as illegal and no more than a political Memorandum of Understanding between western Libya and its military ally Turkey. Libya’s parliament, based in the east, has rejected it. Parliament had already withdrawn confidence in the Aldabaiba Tripoli government. The Aldabaiba government is an unelected interim government which does not have the legitimacy or mandate to sign international agreements.

To rub salt in the Aldabaiba government’s wounds, Dendias did not fly back to Athens but instead landed in Benghazi where he held meetings with House of Representatives Speaker Ageela Saleh, HoR members and Khalifa Hafter.

International Relations and Cooperation
All
2022-11-18
asaeid
Previous Why African countries are lining up to buy Turkey’s weapons
Next Dendias: Athens to strengthen relations with east Libya to boost position against Turkey