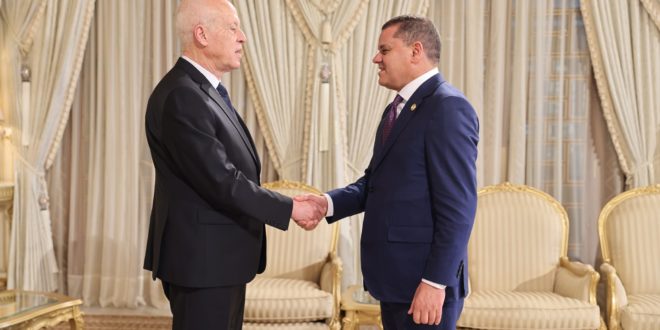 Libyan Prime Minister, Abdul Hamid Dbeibah, discussed with Tunisian President, Kais Saied, on Wednesday political, economic and security files in a meeting between the two sides at the Carthage Palace as the former visite Tunisia at the head of a ministerial delegation, Government of National Unity has reported.

Dbeibah reiterated that his visit aims to enhance economic, political and security cooperation, discuss a number of agreements that contribute to creating fruitful economic cooperation, and facilitate a number of procedures of interest to Libyan citizens and businessmen.

Dbeibah arrived in Tunisia on Wednesday morning on an official visit and was welcomed by his Tunisian counterpart. The spokesman for the Government of National Unity, Mohammed Hammouda, said that the visit came in response to an official invitation from President Kais Saied.

He also discussed with the Tunisian Prime Minister, Najla Bouden, facilitating the work of Libyan businessmen in Tunisia. The meeting was in the presence of Al-Siddiq Al-Kabir, and the Tunisian Minister of Foreign Affairs, Othman Al-Jarandi.

Hokoometna platform of the Government of National Unity said the two sides also discussed strengthening joint work agreements, and setting up the necessary implementation mechanisms for the interests and consensus between the two countries.

International Relations and Cooperation
All
2022-11-30
asaeid
Previous Stefano Marcuzzi reports on the EU, NATO, and the Libya Crisis
Next European politicians accused of conspiring with Libyan coastguard to push back refugees