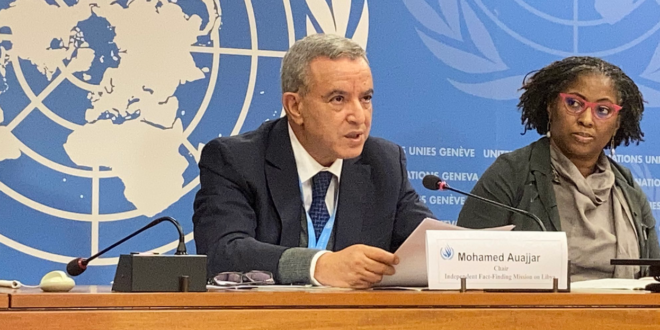 The UN Independent Fact-Finding Mission on Libya has concluded its fifth investigative mission to the country, an extended field visit to Tripoli which took place from 20 October to 21 November, the mission announced in a statement released via Office of the U.N. High Commissioner for Human Rights (OHCHR).

The mission was the FFM’s first to Libya since the Human Rights Council extended its mandate from July 2022 to March 2023.

“FFM Libya reiterated its request to access to prisons and detention centers to investigate alleged violations. However, the FFM has not been given such access to date.”

It has also not received permission from local authorities to visit the city of Sebha, despite repeated requests.

“FFM Libya is grateful to the Libyan Ministry for Foreign Affairs and the Libyan Permanent Mission to the UN, and to UNSMIL for facilitating its access to Tripoli,” it said.

“FFM Libya will continue its work in Libya, and will report to the Human Rights Council at its session in March 2023,” concluded the mission’s statement.

International Relations and CooperationJustice
All
2022-12-01
asaeid
Previous European politicians accused of conspiring with Libyan coastguard to push back refugees
Next What has the EU done for Libya so far?