Home / Normal / What has the EU done for Libya so far? 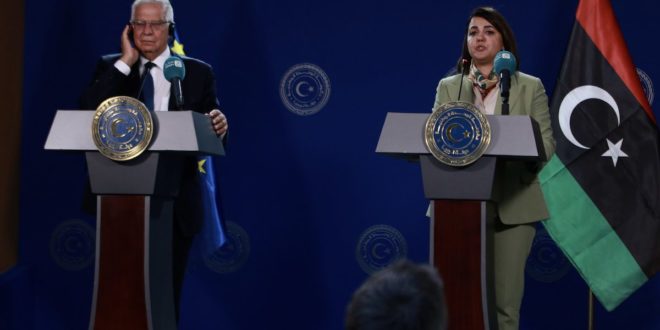 The European Union (EU) is supposed to have a common regional policy, particularly in relation to its immediate neighbourhood, which includes the entire North African region. Such a policy is assumed to represent the bloc’s response, as a whole, to regional issues, including that of security. And the bloc does say it has one policy under a general theme known as “European Neighbourhood Policy” (ENP), developed and implemented by its External Action department headed by Josep Borrel.

Launched in 2004, ENP, a mechanism dealing with EU’s neighbours, is defined as a way to “foster stability, security and prosperity in the EU’s neighbouring regions, both in the South and in the East.” This definition, actually, has its own impeded flaws, since it puts EU’s eastern neighbours in the same basket as its southern neighbours when, in fact, both regions are completely different. In Eastern Europe, for example, the long-term EU policy, clearly, aims for enlargement of the bloc by offering membership to more countries. This has been an on-going EU policy since the fall of the Soviet Union that saw former communist countries joining the EU. How the EU has been responding to the war in Ukraine, for example, and the influx of Ukrainian refugees is clear manifestation of this policy. EU, as a bloc, openly welcomed Ukrainians fleeing the war. This response was not seen in the 2015 migration crises, when nearly a million people, mainly Syrians, fled to Europe. Eventually; the bloc wants to admit Ukraine as a member, however long that might take.

To the South, particularly in North African, the EU is applying a different set of policies that exclude any idea of membership by aspiring countries to join the bloc. Even Turkiye, a partially European country, has been knocking on Europe’s door for decades but, so far, the door is ajar rather than open. Morocco, in the far western North African flank, tried to join the EU as early as 1987, but its application was rejected because it is not a “European country”. This is further proof that the idea of a common ENP policy could not be same in Eastern Europe as in North Africa.

Over the last decade, the main EU policy objectives in North Africa are focused on issues of migration and security. The number one priority, at least since 2011, has been to minimise the unwanted influx of migrants coming from the region, most of whom are not necessarily citizens of the region itself. They are, rather, people fleeing political and economic hardships in sub-Saharan African and Asian countries. With the help of traffickers, they use the traditional routes crossing the Mediterranean Sea into Europe through the weakest link: Libya in this case.

This singles out Libya, especially, because of unwanted migration. The security threat from Libya became even more urgent after the EU took part in destabilising the country in 2011. In that year, all EU countries, specifically NATO members, helped topple Libya’s former Muammer Gaddafi regime. Something most EU countries now regret, but the damage not only to Libya but to Europe has already been done. While destroying Libya was unwise, the bloc is yet to develop a coherent and united policy to deal with unstable and ungovernable Libya. In fact, any EU Libya-policy, if it exists, is chaotic, disunited and shambolic, to say the least. The only exception is seen in offering financial and technical aid to a country that has been without any effective central government for most of the last 11 years.

Instead of finding better ways to quickly stabilise Libya, the EU has, rather, been focusing on pumping money into programs with little accountability and little success. EU sources, for example, say the Union has, so far, spent some €4.9 billion on Africa’s three regions, with €900 million on the North African region. Most of that money went towards tackling migration, particularly coming out of Libya. The EU funds different programs in Libya through what is known as “civil society”—a country where organised civil society does not exist. On the other hand, the EU’s most important policy tool to help secure Libya is under-funded, and its recommendations are largely ignored.

Operation IRINI (Greek for peace) aimed at stopping the flow of arms and fighters into Libya, with the ultimate aim of ending foreign meddling in Libya, is hardly taken seriously. In fact, IRINI is EU’s best policy, so far, to deal with the Libyan crisis.

IRINI’s efforts to reinforce the United Nations’ arms embargo over Libya could have been more effective had the EU been taking its recommendations seriously. Such recommendations are submitted to the UN’s Sanctions Committee on Libya, through the EU, then to the UN Security Council to take action against the arms embargo violators. This, however, is not the case. Last year, IRINI’s then commander, Rear Admiral Fabio Agostini, told MEMO that IRINI’s reports to the EU are ignored. He also said that IRINI lacks funding, pointing out lack of effective cooperation from “relevant stakeholders such as the US and NATO”.

Instead of being in the field military operation, IRINI has, since its launch in 2020, evolved into a reporting mechanism whose advice is sidelined. Europe, if serious about Libya, with its two veto holding powers in the UN Security Council, France and the United Kingdom, should be able to do more in this regard.

While supporting action programs focusing on refugees, displaced persons and local administration in Libya are welcomed, they are not the answer to Libya’s main problems: security and governance. And it is abundantly clear that neither security nor effective government can be achieved if Libya continues to be open to foreign meddlers and dominated by militias and gangs, some of whom are involved in people trafficking—the ending of which is a major EU policy objective.

Furthermore, EU individual countries’ competition over Libya is also counter-productive to EU and Libya. As recently as 2019, Italy and France, two major Union countries, were engaged in rivalry supporting different factions in that year’s war over the control of Tripoli. While Paris supported eastern Libya’s General Khalifa Haftar, Rome sided with the then Tripoli-based government.

For any EU Libya policy, to succeed, it must prioritise security and governance with actionable advice. Otherwise nothing will change, and the EU will continue to fund the wrong projects with little in return, while Libya continuous to be a problem.