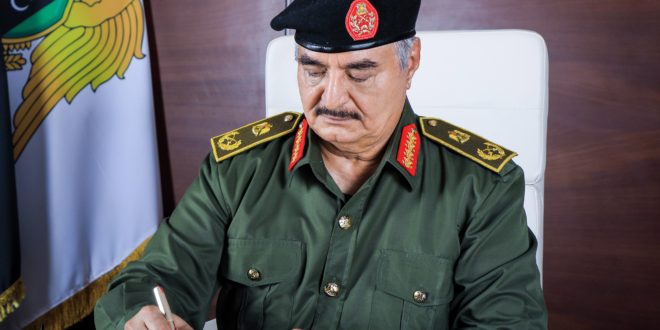 The “Khalifa Haftar era” may be coming to an end in Libya, after reports that the ageing warlord, who has been suffering ill health, is grooming his son, Saddam, to take the reins.

Haftar reportedly asked his partners to support Saddam’s attempts to stand in any future Libyan presidential election during a meeting with Speaker of the Tobruk-based House of Representatives Aguila Saleh and head of Libya’s Presidential Council Mohammed Menfi, last week.

The militia leader, who effectively rules much of eastern Libya, also revealed he would not run for president himself, reports said, but wants his son to succeed.

No timeframe for Saddam’s succession has been given and no public statements have been made by the Haftar camp, but it follows reports in Russian and Arabic media about the plan, which have been confirmed to The New Arab by a Libya expert.

Khalifa’s other son, Belqasim, a senior political adviser to his father, is seen as less likely to take over from his father as commander of the self-styled Libyan National Army.

Haftar, a former general in Muammar Gaddafi’s military, has been a key player in Libya’s ongoing power struggles since 2014 and a major factor in the simmering armed conflict.

In 2018, false rumours circulated that Haftar had died but were soon dispelled by the former UN chief in Libya, Ghassan Salame, who confirmed he was still alive.

Observers see Saddam as the inevitable inheritor of the power his father has amassed, but many Libyans, victims of Haftar’s ruthless fighters, are likely to resent the new de-facto ruler of the east.

Flanked by his sons, Haftar has been accused of ruling eastern Libya with an iron fist, committing atrocities against the Libyan population and riding roughshod over civil liberties.

Haftar junior is also believed, by some Libya experts, to support the Abraham Accords – normalisation deals agreed between Israel and several Arab governments, which sparked huge controversy in the region.

Saddam reportedly met with Israeli intelligence officials in March to discuss his own bid for the presidency as early as April 2021.

Rumours of Khalifa Haftar’s drift from his Russian backers to the West were compounded earlier this month after he met with CIA director William Burns during the latter’s landmark visit to Libya.