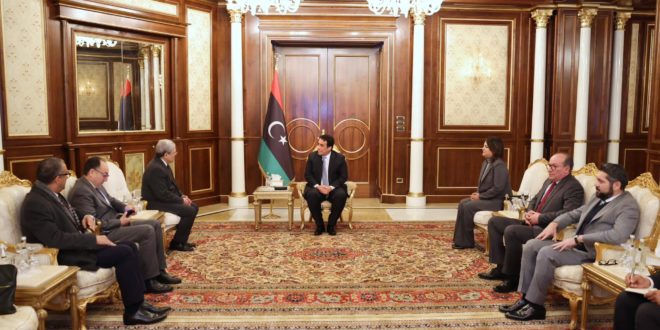 The Head of the Libyan Presidential Council, Mohammed Menfi, has reiterated Libya’s insistence on “exercising its full rights” at the League of Arab States, rejecting “the Arab League’s bias to a certain party or entity,” without naming anyone.

Menfi’s statement came on Monday, one day after several Arab countries didn’t turn up to a consultative ministerial meeting of the Arab League hosted by Tripoli, as Libya is now in the chair of presidency of the Council of the Arab League.

Menfi met with the Foreign Minister Najla Al-Mangoush, and her Tunisian counterpart, Othman Jarandi, according to a statement by the Libyan Foreign Ministry, which added that Menfi had hailed Tunisia for supporting the efforts of the Government of National Unity to assume the presidency of the League of Arab States, rejecting “any discrimination toward Libya’s rights and duties,” and stressing Libya’s insistence on exercising its full rights in the Arab League, reiterating that it should “play a role that enhances solidarity and unity among member states.”

Meanwhile, Jarandi praised Libya’s presidency of the 158th session of the Arab League and its insistence on exercising its full rights in playing an Arab and regional role that contributes to strengthening joint action and restoring the real role of the League of Arab States, according to the Libyan Foreign Ministry’s statement.

Tripoli hosted the 158th consultative meeting for Arab Foreign Ministers, which was chaired by Libyan Foreign Minister. The meeting was attended by delegations from Algeria, Tunisia, Qatar, Palestine, Oman, Sudan, and Comoros, in addition to the Special Representative of the African Union and Head of the United Nations Support Mission in Libya. UAE, Egypt, and Saudi Arabia’s representatives didn’t show up to the meeting.

Al-Mangoush said, in a press conference after the meeting, that she was surprised that the Arab League’s secretariat invented a condition that does not exist in the charter and regulations, which was “requiring that 14 countries confirm their attendance of the Tripoli meeting in writing, which embarrassed many countries and showed the League as biased to one certain country.”

International Relations and Cooperation
All
2023-01-24
asaeid
Previous After years of fighting alongside Haftar, Chadian armed faction withdraws from southern Libya
Next ‘End of Khalifa Haftar era’ as Libyan warlord prepares his son, Saddam, to succeed: reports